Stop all kinds of violence and harassment towards Arab and Muslim women. On this blog I will let the world know about this devastating phenomenon and share with you atrocities and horrible stories which occurred and are occurring to women of the region. From this blog I want to reach out to all parts of the world to take action in educating the people of the region about the harm that can result from the atrocities related to the way women are treated in their countries. People of these places need to be educated and enlightened. People of these regions need to know the real principles of their religions and believe systems. I don’t believe there is one religion or creed in this universe that calls for maltreatment of women. Please help me share my passion, spread the word, and interact with me to find a solution and instill it in the inflicted areas. 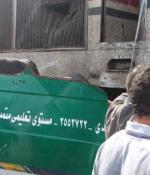 A call to the free world, innocent children slain in Egypt

A while ago I posted a post wondering if the Prime Minister of the Muslim Brotherhood government will act up to par with his responsibilities.   Now I am calling on the free world to help us take the Egyptians from the pit Egypt has sunk into. The free world thinks that Morsi’s… Read More ›

Is blue better than pink?

Arab women have self esteem and respect yourselves: The age of Harem is past and way gone!

This photo is sent to Dubai to “The uprising of women in the Arab world” انتفاضة المرأة في العالم العربي A page on Facebook about Arab women‘s rise as a result and a must in the wake of the Arab Spring. As seen in the photo there are… Read More ›

http://www.guardian.co.uk/law/2012/nov/13/female-genital-mutilation-prosection-uk?cat=law YES… YES…GREAT NEWS.. This is because the third world or underdeveloped countries always look up at the developed countries and blindly imitate them. Perhaps, only then will they come into their senses and indict those who mercilessly commit this crime and FINALLY put an end to a beastly savage habit. Related articles Keep Your… Read More ›

KEEP YOUR HANDS OFF (FMG)

KEEP YOUR HANDS OFF (FMG) Female Genital Mutilation (FMG) or some called Female circumcision When will men, fathers, brothers and future husbands remove their hands of girls and women? When will women be given the right to own their own bodies and parts of their bodies? When will the extreme control and hatred towards women… Read More ›

Can there be more harassment and violence than this one?

Can there be more harassment and violence than this one? A [da’iya] preacher like Muslim Skeikh beat his five-year old daughter and burned her to death. After five days of struggling to live, Lama, the five years old succumbed to her infliction. She entered Ashshumeisy Hospital in Riyadh, KSA with a sever hemorrhage in the… Read More ›

Another form of violence to women and shere domination

Another form of violence to women and shere domination.

Another form of violence to women and shere domination

The present ultra conservative Muslim Brother’s government is in the process of modifying & writing the constitution. In a nutshell, they want to limit a woman’s role to just being a wife, children bearer & a mother. It doesn’t include any items about her rights & her role in the society or even marriage because… Read More ›